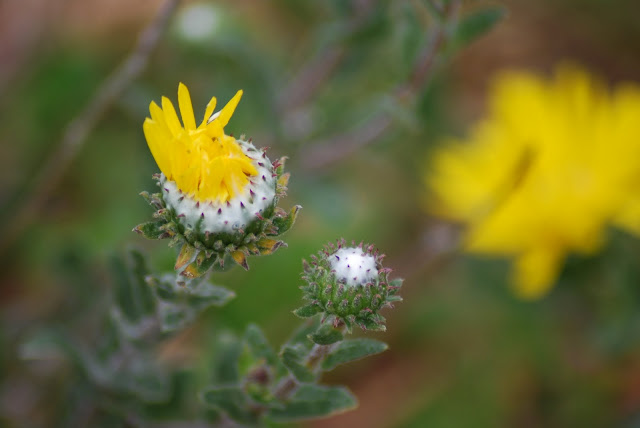 I chose hairy gum plant - Grindelia Hirsutula for Earth day because we are in a sticky situation. This California native plant fosters biodiversity in our wetlands.

Close to 50 years since on April 22, 1970, when earth day began and people were inspired to take to the streets and demand that industry and governments take better care of our planet. My father is from Donora, Pennsylvania when in 1948 the smog was so bad 26 people died in a single day. The surrounding hillsides where barren and animals were dying in droves from poor air quality. People could not see their neighbors house. My mother remembers the sickly sweet taste in her mouth, the constant clanging of metal and intermittent explosions of the steel mill throughout the night. Yet it wasn't until 1963, almost 20 years later that legislation passed the clean air act yet. By 1970 little action had occurred. In the U.S. and around the world, smog was becoming increasingly deadly and evidence was mounting of the developmental delays in children due to toxic air and water. Biodiversity was in decline then, 50 years ago as a result of the heavy use of pesticides and other pollutants and is in a steeper decline today exacerbated further by Co2 emissions that cause climate change.

The US Congress and President Nixon responded then to the mounting evidence of environmental damage and we have to keep the pressure on today. Earth day is one way we keep our planet and its atmosphere at the forefront of everyone's mind. In July of 1970, they created the Environmental Protection Agency, and foster robust environmental laws such as the Clean Water Act and the Endangered Species Act, now 50 years later we have to protect those laws and enact more to restrict carbon dioxide emissions and to protect our lands, water, and atmosphere.

One billion people celebrate the global Earth Day event each year. Earth Day grew out or Rachel Carson's book, Silent Spring and will now become the loud and clarion call that more than 1 billion people in 192 countries take part in to ask loudly of our governments and industry to recognize the rights of nature, the need for biodiversity and more comprehensive restrictions on greenhouse gases in our atmosphere.

Take a moment to appreciate the blossoms in your neighborhood, to think about the bees that pollinated your food, to feel the breeze and hear the bird song. Love these things a little more day by day because without them we can not continue our life with real dignity.